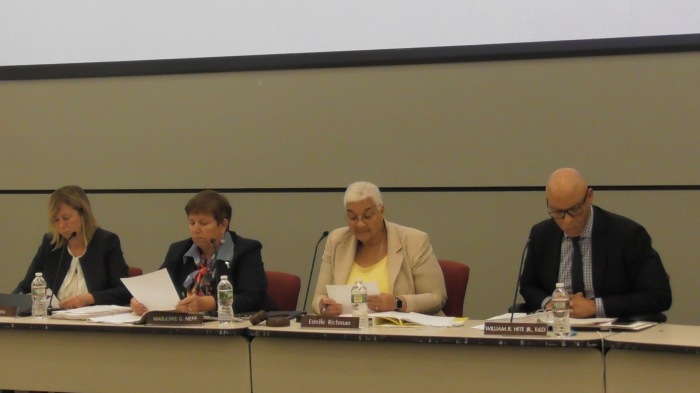 Both the elected and appointed officials who control the SRC seem to hold the people of Philadelphia in very low regard.  Mayor Kenney removed two of the previous Commissioners, Chris McGinley and Joyce Wilkerson, so that they would be able to serve on his newly-appointed school board. Their seats were filled by two placeholders, former SRC Chair Marge Neff and former district staff member Fran Burns. In addition, the SRC has been conducting business with only four seats filled because of Governor Wolf’s decision not to replace Farah Jimenez after she unexpectedly resigned in February. Bill Green showed his disrespect for district stakeholders by skipping yet another meeting (we’ve lost count of all the meetings he has been absent or late for in the last year).  The charter schools Green supports can fire staff without explanation or due process, and Green can be absent without explanation or regard for the community. We did wonder whether the SRC withdrew two resolutions concerning charters just prior to the meeting, without explanation, because of Green’s absence. Present at this meeting were: Chairwoman Estelle Richman and Commissioners Fran Burns and Marge Neff.

The agenda contained two staff presentations, one scheduled and one unscheduled.  Chief Operating Officer Danielle Floyd gave information pertaining to walk-on Resolution A-24 for $12,913,700 Capital Awards IV, which was posted 48 hours before the meeting.  This resolution was listed with only a title–no supporting text. Floyd’s presentation explained the expansion of the early literacy modernization that has already begun in seven schools. This modernization will be expanded to eleven more schools over the summer.  Floyd stated that this was a walk-on resolution because her office evaluated the impact on classroom practice for schools already done before expanding the initiative.  APPS has repeatedly called on the SRC to follow the mandate of the Sunshine Act and post full resolutions before voting. It is illegal to vote on a title only resolution and post the full language AFTER the vote, but that is exactly what was done again.

Although refurbishing rooms is a boon to dismal and uninspiring classroom environments, it is still necessary to question the choices of the Hite administration and the SRC.  Recent articles in the Inquirer, Toxic City – Sick Schools and Botched Jobs: From harmful dust to toxic fumes, poor oversight is blamed as school repairs make the same mistakes again and again, show the dangerous and unsafe conditions of our school buildings. District officials’ priorities raise both questions and concerns. The assigning of priority to district money spending decisions is imperative. Should the district be revitalizing or detoxifying? Dr. Hite has said that it would cost $150 million to fix sick buildings. Last year, the SRC passed a single $145 million resolution for contracts to four vendors for “alternative education”, so we don’t see a resolution for $150 million to keep children healthy as an impossibility. APPS is constantly looking at the money the district spends, millions of dollars at a time, and questions just that–priorities and motives.

The scheduled staff presentation and powerpoint, also by Danielle Floyd, pertained to the Guaranteed Energy Savings Agreement (GESA) Pilot.  A resolution will appear on the May 24th agenda for this project. Three high schools were selected to spearhead the pilot that will consist of renovations to the school resulting in energy savings: Northeast High School, Saul High School, and Strawberry Mansion High School.

Completing needed renovations that will result in energy savings sounds like a positive project.  The concern is again priorities. Without seeing the actual resolution, it is unclear how much money is being spent on this project. Hopefully, the powerpoint, as yet unavailable, will be available on the district’s website soon. Every capital improvement in our school buildings should be dedicated to eliminating all forms of toxicity that can harm our students and staff.  If this project fulfills this need it is a plus.

Another looming question about this project is the selection of Strawberry Mansion High School as one of the pilot schools. Despite his public denials, Dr. Hite is shuttering Mansion as a comprehensive neighborhood high school. As APPS keeps pointing out, a school is the students, educators and the educational program–not the building. Bringing in vendors to the building for as yet unspecified programs, along with a decision not to admit 9th graders,  is a clear indication that SMHS will cease to exist as a neighborhood high school. The community has had no say, no input, no voice in this process.  They are fighting to keep Mansion a comprehensive high school and demanding the district restore services, programs, and resources that have slowly but systematically been stripped.  Are they fixing the building for the vendors now, having neglected for so long to do so for the children of the Strawberry Mansion community?

At the April 26th SRC meeting, commissioners reversed their February 22 vote to deny a charter to Franklin Towne Middle Charter School, voting to approve the new charter application. This was in spite of over thirty deficiencies in FTC’s reapplication cited by the SRC’s own Charter School Office (CSO). Several APPS members quoted from an extensive Notebook article  by Greg Windle  published just before this meeting. Windle’s article raised serious concerns about the financial practices of the two existing Franklin Towne Charter Schools which first came to light in the City Controller’s Office in 2010and continue to this day.

APPS Co-founder Lisa Haver noted that the SRC had failed to respond to a letter sent by APPS earlier in the week that had asked the commissioners to explain their vote to approve the Franklin Towne Middle School application. She noted that as public officials, they have an obligation to explain actions that affect students and taxpayers across the city. Commissioner Burns answered by saying she would provide an explanation of her vote at next week’s meeting, even though Haver had ceded most of her speaking time to make time for the explanation. Commissioner Neff reminded the audience that she had voted both times to deny FTC.  Commissioner Richman did not respond. Commissioner Green, who voted to approve FTC’s original and its re-application, was unable to explain as he was absent.

For example, Ad Prima Charter School has two listed locations: a K-8 at 3556 Frankford Avenue in Kensington (19134)  and another K-8 at 1922 N. 63rd Street in Overbrook (19151). (The first question about this school is: Why is this listed as ONE school when it is two distinct K-8 schools in two different parts of the city?) Ad Prima wants to move its Frankford Avenue school to a new location in a different part of the city. The proposed move is to 8034 Thouron Avenue in East Mt. Airy (19150); that location is 8 miles away and at least an additional  hour commute. The amendment indicates both a number of families in support of this move as well as concerns about the effect on families.

But what about the East Mt. Airy community in which Ad Prima is relocating?  Have those families been surveyed about which schools  move into their neighborhood? The amendment also notes that 60 of their 550 students live outside of Philadelphia city limits; that is, over 10% of the student body are not city residents. This is the opposite of a stable, neighborhood anchor. A truly public school should be not just a cornerstone of democracy but a cornerstone in its neighborhood.

To add another  twist to this relocation story, enter another charter school–Deep Roots.  A board member of Deep Roots, whose application was approved last year after originally being denied, came to speak in favor of having Deep Roots’ move into the 3556 Frankford Avenue location. Jason Tucker argued that they should be able to move into this location because Ad Prima completed upgrades to the property, making it a viable option for their school. The idea of Deep Roots choosing another location before it even set up shop was one that had never appeared on any Resolution List and had never been discussed in any staff presentation. It appears that the two charter administrations have been privately negotiating to swap locations. The Ad Prima amendment raised the following current facility concerns: the temperature of the current facility is not well regulated and at times the building is either too cold or hot to provide an optimal instructional environment, the current facility has annually increasing maintenance costs, lack of safety in the neighborhood and limitations of the facility’s grounds related to arrival and dismissal which occur curbside on Frankford Avenue, lack of dedicated cafeteria and gymnasium, limited instructional and student technology due to infrastructure limitations of the facility, accessibility concerns, poor condition of the bathroom facilities, and lack of suitable and sufficient instructional spaces for special education and pull-out instruction.

A district school that is overcrowded and lacks dedicated gym and cafeteria space can’t move!  The Toxic City – Sick Schools Inquirerarticles highlight our district schools concerns about infrastructure, but those schools can’t move!

We expect two previously denied charter applications to be popping up soon on the resolution list for reconsideration: Philadelphia Hebrew Public Charter School (PHPCS) and APM Community Charter School.  Both schools re-submitted applications after the CSO listed numerous concerns with their original applications.  PHPCS is a chain operating in New York City, and APM has never operated a K-8 school.  APPS members have repeatedly testified about the financial harm to public school students that occurs with the continued approval of more and more charters.  Philadelphia has become charter school saturated–most with less than stellar records– leaving crumbs to remaining public school students