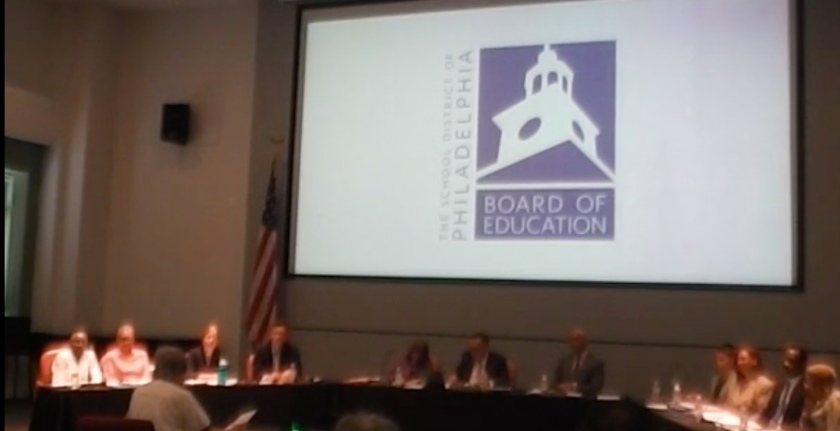 All nine members of the Board of Education (BOE) were present.  Eight members of APPS attended; five testified on behalf of public education.  Mayor Kenney came to welcome the students who were chosen as non-voting BOE representatives.  Of 54 applicants, two students were selected by a Board committee to serve as non-voting student representatives.  Julia Frank of Northeast High School and Alfredo Pratico of J.R. of Masterman High School were sworn in and seated.  They will alternate attendance at future meetings and will bring student voice to issues before the Board.

City Councilwoman Blondell Reynolds-Brown spoke to welcome the Board and to advise them that City Council was there to support and monitor district operations.  She noted three main areas of concern: school health and safety, suspensions, and African-American studies in the district’s high school curriculum. Also in attendance for part of the meeting was Councilwoman Helen Gym.   Gym has been outspoken against the Keystone Opportunity Zone (KOZ) and was the only No vote on the issue earlier that day in Council. The Board’s agenda included a vote on the current list of KOZ properties (more on this below).

The meeting began with a  lovely musical performance by Universal Language, a group of Franklin Learning Center students.  It was inspiring to hear the beautiful voice and stellar musical accompaniment of these student musicians.

Superintendent William Hite addressed the District’s upcoming open enrollment process.  The timeline has been moved, but the total number of days to complete the application process is the same.  Applications can be submitted from September 21st through November 2nd. There was a question about counselors having a difficult time due to the new timeline conflicting with Early Admission College Applications (EACA).  Dr. Hite said that only 5 high schools were possibly affected but research indicated really only one school would be affected. They were assured by that school there was no problem with conflicts impacting the EACAs.

Board Reverts to Business as Usual

The official BOE agenda included an extensive visual presentation on the Keystone Opportunity Zone (KOZ) properties from First Deputy Director Sylvie Gallier Howard and Senior Deputy Director Duane Bumb of the City’s Commerce Department.  (The power-point can be viewed here.)  The PA General Assembly created KOZs in 1998 as a program designed to spark development in blighted, vacant, or underutilized properties that might not otherwise be developed. This program abates a long list of both state and city taxes as the lure for investment and the projected economic improvement, particularly job creation. The hook for the School District is that by law these properties must make Payments In Lieu of Taxes (PILOTS) that amount to 110% of the 55% that would come to the District in real estate taxes.  These PILOTS are paid annually and are based on the previous year’s property assessment. By law, both City Council and the BOE must approve the list of properties submitted by the Commerce Department before the applications can proceed to the state.  (These properties can be viewed on the above mentioned powerpoint.)