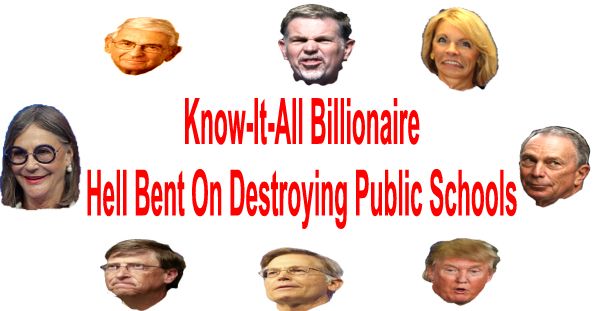 When President Trump nominated Betsy DeVos, a woman with no degree or experience in education, as U.S. Secretary of Education, defenders of public education organized an unprecedented effort to fight her confirmation. Unfortunately, her stunning display of ignorance about education and the rights of public school students was not enough to stop the Senate from confirming her.  But we now know who DeVos is and what her agenda is: advancing the privatization of public education under the guise of  “choice.”  She is a government official, accountable to the American people. We can call our elected officials when she fails to uphold the rights of all schoolchildren.

But whom can we call to stop Priscilla Chan from imposing her will on public education?  Or Laurene Jobs?

Priscilla Chan is a physcian and wife of Facebook founder and CEO Mark Zuckerberg, now the world’s fifth wealthiest person. Laurene Jobs is the widow of Apple co-founder Steve Jobs and the world’s fourth wealthiest woman. Neither has a degree in education or any experience teaching in public schools, but both have embarked on massive projects to impose their ideological visions of education on schoolchildren across the country.

The recently established Chan Zuckerberg Initiative is funding the development and distribution of software that would create an online profile of each student’s “strengths, needs, motivations, and progress” and may, according to a June Education Week article, “help teachers better recognize and respond to each student’s academic needs while also supporting a holistic approach to nurturing children’s social, emotional and physical development.” That’s a tall order for two young people with no background in child development or education—unless you count Zuckerberg’s foray into education reform in Newark in 2014, when his $100 million grant enabled Gov. Christie’s disastrous privatization scheme. Zuckerberg, who has never lived in Newark, later told a reporter he “learned a lot of lessons from that.”

Meanwhile, CZI is investing in lobbying for legislation that would enable the imposition of this unproven program in schools and districts across the country in the same way the Bill and Melinda Gates Foundation successfully lobbied for the use of Common Core standards in all 50 states before they had been tested in a pilot program.

Laurene Jobs graduated with a degree in economics from Penn, ran a natural foods company and worked for three years at Goldman Sachs as a trading strategist before marrying Steve Jobs. None of that qualifies her to even teach in a public school, but her massive wealth apparently makes her an expert in the history and curriculum of public education, as well as child development and pedagogy. Recently, Jobs and her XQ Institute bought an hour on the four major TV networks to simulcast a star-studded (but not educator-studded) extravanganza  to hawk her plan to “reimagine” the country’s high schools — mostly by using more technology.  Has Jobs found some research that shows teenagers need to spend more time looking at electronic devices?  When you run a technology company, not surprisingly, the answer to everything, including the things you know nothing about, is more technology.

Over the past 20 years, education policy has increasingly been enacted not to satisfy the needs of the students and their families, but the wants of the wealthy and powerful who are converting public education from a civic enterprise to a marketplace for edu-vendors: the Bill and Melinda Gates foundation has paid to expand charters and lobby for the use of Common Core standards in all 50 states; real estate and insurance mogul Eli Broad now leads a group of corporate funders pushing a plan to move half of all K-12 students in Los Angeles into charter schools; the Walton family has initiated a new $1 billion campaign to promote charters nationwide; Trump financier Carl Icahn has established a chain of charters in New York City.

No one elected these billionaires, and they are accountable to no one.  We can’t call our members of Congress to object to their policies. While Americans continue to condemn the power of the very rich to influence elections, we must also fight to stop them from having more influence over the future of our young people than the constituents of democratically elected school boards.