Skip to content
HomeThe transcript of the testimony of Barbara Dowdall.

Click the picture above and move the slider to timestamp 32:58 to view Barbara’s testimony. 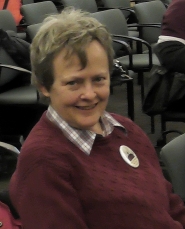 I now realize why I have not addressed the SRC by names of individual members. Just last month, my audience included Mr. McGinley and Ms. Wilkerson. Congratulations Chair Richman, welcome back Principal Neff and welcome Ms. Burns! Hello, again, Mr. Green. My March comments, also on the legacy of the SRC, are available on the Alliance for Philadelphia Public Schools (APPS) website should my seven copies be difficult to locate.

We are looking at a unique situation as, even though the SRC dissolved itself last year, it has continued operation in the same spirit and plan of action and looks to continue full charge up to the last day in June. Further, Superintendent Hite, Mr. McGinley and Ms. Wilkerson will all be part of the new regime.

I assure Dr. Hite and the two commissioners, now School Board designees, that noneof us is requiredto replicate every aspect of our legacies, whether familial, scholarly, vocational or societal.

Though their families were both located around Pittsburgh for several generations, my parents broke the mold and moved to Chicago.

My own high school, Girls’ High, in 1952 stepped away from its tradition of an overnight senior class trip to segregated Washington DC, switched to New York City, and went on to treat equitably students of color like Ann Hobson Pilot, first African American principal harpist in the Boston Symphony, and Shirley Clarke Franklin, first woman Mayor of Atlanta.

The United States Navy set aside longstanding tradition of male only pilots to train Tammie Jo Shults, she lately in the news for impressive skill.

The Supreme Court of the United States surprised many by affirming the legitimacy of marriage equality.

Though time is short, the School Reform Commission as presently constituted and its administration, could lay the groundwork for a new celebratory day in Philadelphia public schools:

Register enthusiasm for the restoration of our fully-resourced and professionally-staffed libraries. Organize busloads to lobby for PA HB 740.

Rather than establish new, especially questionably qualified, charter schools, adopt some of their practices like smaller classes and extended hours that would serve all students and their families.

Invite school staffs and parents to apply for and direct how funds from entities like Philadelphia School Partnership would be used.

Call on the outstanding teachers in schools like Masterman, Central, SLA, Hill-Friedman, Penn Alexander, and CAPA along with 5 years richness of Teachers of the Month and Lindback winners to provide high quality affordable staff development.

Indentify, catalogue and prioritize the greatest needs in school physical plants citywide. Begin the work immediately and pass on the list of unfinished work to the new school board.

Use your own imagination, personal school experiences and care for the SRC’s legacy to articulate and pass on (or bring with you) to your successors a grand vision for the School District of Philadelphia.