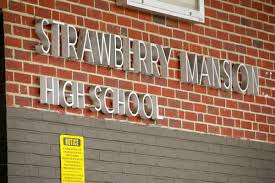 Several APPS members, in response to requests from community members, attended a meeting at Strawberry Mansion High School  (SMHS) on Wednesday, March 28. About fifty people—including parents, educators and alumni—attended the meeting, facilitated by Eric Becoats, Assistant Superintendent in charge of the district’s Turnaround Network. Like many of those in attendance, APPS members found out about the meeting from a notice posted on social media two days before. The district posted no banner about the meeting on its website, nor was there was any mention of possible change at SMHS at recent SRC meetings. Rumors had spread, in the absence of definitive information from the school district, that Strawberry Mansion, as a comprehensive high school, would be closing at the end of this school year. Some had heard that other programs, possibly twilight school or alternative education programs for students with academic and/or behavioral issues, would be housed in the building.

Using barely readable power-points, Becoats read through some possible changes and the reasons the district is “phasing out” the existing educational program at SMHS. There will be no 9thgraders admitted in September 2018. The remaining students will complete their years and graduate from Mansion.  Starting in September 2018, Becoats said, neighborhood students could attend a newly added accelerated school in the building, but he gave no details about the program or who would oversee it. An evening program for overage students and adults may be added later. In September 2019, 9thgraders could then be admitted to a new “skills-based” high school in the building.  Becoats said that was only “under consideration”, to which a community member responded, “So new students will evict existing students.” Becoats claimed that there would be full staffing until the last class graduates, and that the remaining students would complete their years and graduate from Mansion, but did not specify how the school could maintain sufficient staff for a variety of programs with declining enrollment. Nor did he seem to have any idea how the students in the remaining grades would deal with decreases in student body and staff.  Becoats continued to deny that Strawberry Mansion High School is being closed, as if the existence of the building constitutes the essence of the actual high school.

Several attendees, including the president of the Alumni Association, asked why they were not invited to a meeting held last week that they found out about after the fact, at which those invited were able to address questions directly to Superintendent Hite, City Council President Darrell Clarke, Becoats and other district administrators. Two people who had attended that meeting each stated emphatically that they had only been given some information then, not consulted about what would happen. They also stressed that they had not spoken for the community and had not agreed to anything proposed.

Mansion’s Alumni Association President also voiced her outrage about a June 2017 ABC News national report calling the school “one of the most dangerous in the country”; she felt that the news coverage and the plans for the school were connected and that the District was “exploiting school kids”. At its April 2017 meeting, the SRC approved a $145 million resolution to contract with various vendors for alternative learning programs in locations to be determined. A few months later, Becoats held a meeting at Mansion, at the request of community members, to confirm or deny rumors that alternative programs run by Camelot would set up shop somewhere in the building.  APPS member Lisa Haver was invited by community members to attend. She reported that Becoats refused to answer repeated questions about whether Camelot would be operating out of Mansion.

In response to Becoat’s rationale that the school is vastly under-enrolled and that students are selecting other schools because of deficiencies at Mansion, a long-time resident pointed out that in past years, the district has closed many of the schools that feed into Strawberry Mansion, including nearby Walton Elementary, L.P. Hill and Strawberry Mansion Middle School (both Hill and the middle school sit on the same parcel of land as the high school).  That is, the district created the conditions which have led to the present under-enrollment.  Another resident noted that just last year, the 2017 SMHS graduation rate had the largest increase of any high school in the city.

In addition to raising concerns about the lack of inclusion in the process, attendees had specific questions and comments about Mansion’s future:

Members of Our City Our Schools (OCOS) coalition, including Antoine Little and Tonya Bah (a nominee for the new school board), arrived after attending the OCOS rally at the University of Pennsylvania that called for tax-exempt universities and corporations to contribute to Philadelphia’s schools. They spoke about the continued closing of public schools in Philadelphia for business gains and the negative effect these have on Philadelphia’s neighborhoods, students and educators. When Ms. Bah asked Becoats to identify the contractors who would be operating programs at SMHS, he replied that he did not have those names with him.  His answer was an affirmation that programs set up in the Mansion building will not be district-run, they will be outsourced to private contractors. At its April 27, 2017 meeting, the SRC approved a $145 million resolution to enter into contracts with several vendors for alternative learning programs. (See Resolution B-4, SRC Resolution Summary)

Speaker Ruth Birchett identified herself as both a member of the first graduating class of Strawberry Mansion High and Co-Chair of the now-defunct Save William Penn High School Coalition. The Coalition waged an unsuccessful battle in 2009  to have the district fulfill its promise to save and refurbish that school, which was eventually purchased and destroyed by Temple University. She declared that the district’s plan for Mansion is “reactive, not proactive.” She gave notice that as a retiree, she has plenty of time to fight the closing of Strawberry Mansion High School—and the proposed Temple football stadium.

Update: A subsequent meeting organized by community members was held at the school on Thursday, April 4. Several people spoke of the need to attend SRC meetings and speak out against the closure of Strawberry Mansion High. APPS members reminded attendees that the school communities of both Stanton and Sheppard schools fought successfully to stop the district from closing their schools in 2012  after sustained public lobbying at SRC meetings.

To speak at any SRC meeting, call the Office of Family and Community Engagement at 215-400-4180 by 4:30 p.m. on the day before the meeting at which you wish to speak. You have 3 minutes to speak and timing your remarks is important because they will turn your mic off at the end of 3 minutes.