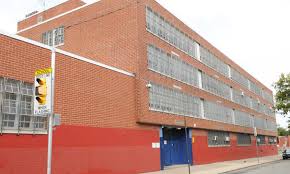 by Karel Kilimnik and Lynda Rubin

Prior to the meeting, Temple University Professor Lori Shorr answered some of the questions we asked her about the community outreach process. She said there would be four night meetings for parent input: 1) tonight – breakout meetings after general presentation; 2) “randomized” selection of parents invited by SDP; 3) parents invited by principal, 4) community input and ideas on October 11. Cambridge Education would also be meeting with parents invited by principal including SAC and “everyone”. “Feedback and Findings” meeting will be held on November 8 at 5:30pm. Dr. Shorr said a transcript will be submitted to the district but will NOT be available to public.

Davis-Bowie ran the meeting, mostly reading from the power-point presentation. Little explanation was given about the priority process. No one from Cambridge spoke as they did during last year’s process. Davis-Bowie opened with what wouldn’t occur: Rhoads would not be closed or turned into a charter school. She said that no recommendations had been made and that the district “wants your high-impact ideas”. Rhoads was selected due to 1) past three years in Intervene status; 2) no previous SDP intervention (“because change takes time”); 3) SPR average 15% or lower out of 100. Principal Parker reviewed some of the data from power point. Davis-Bowie praised teachers for their commitment and caring; she said that “the staff couldn’t work any harder” which “is not common”. She pointed out that teachers came in on their days off to work and plan. She also said that Rhoads selection was about lack of progress, not lack of hard work and that students are able to achieve with support. She said that the SDP “wants to be strategic” so students get what they need. Davis-Bowie said that Cambridge would be conducting is own School Quality Review by spending two days in the school and that breakout groups would be conducted by Temple staff. Possible options for Rhoads’ future were given:

Davis-Bowie answered some of the questions and comments posed by parents and community members:

Karel: Turmoil is created by forcing teachers to reapply for their positions, and only up to 50% may be rehired.

Answer: The retention rate of teachers is now up to 80% and sometimes 100%.

Lynda: why not retain all staff who want to stay? Why only 80%?

Answer: Teachers have to agree to participate in extra meetings, etc. and agree to the plan. [Note: agreeing to plan may include agreeing to terms other than those in PFT contract, including weeks of PD during summer.] She then said that all teachers can stay – if the site selection committee approved. (Karel noted question not asked at meeting: Who is on this site selection committee deciding which staff gets to stay?)

Shira: Who chooses the school partner?

Answer: The school. McDaniel picked Jounce. (Note: how much is actually decided by school district administration is unclear.) Davis-Bowie said that school gets additional climate staff and other supports.

Karel: Why not just give the school the extra supports?

Karel: How long do schools stay in Turnaround status and what happens afterwards?

Answer: We haven’t been doing Turnaround long enough to see how process works out. Schools are given three years, then have to find a way to pay for resources themselves.

Break-out parent groups: (Last year’s process allowed for full parent and community input during large group meeting.) Two groups had to be consolidated since so few people attended. One group only had three parents, one of whom had just enrolled child two days prior. Temple coordinators (Maya Cuccharia and Kamal), FACE representative Angela Butler and other FACE representatives who several times promoted the idea of “school volunteers” and tried to recruit parents to get clearances and training to be volunteers in the classrooms.

Parent expressed many concerns about school climate (bullying and altercations), communication and academics. They took the facilitator’s questions seriously, but Temple staff apparently didn’t know enough about how schools operate internally to accurately decipher the meanings of parents’ stated concerns and then elicit data and feelings pertinent to those concerns. For example, parents were talking about non-school district personnel such as crossing guards. Some complaints were about individual teachers, not staff overall. Temple coordinators’ questions seemed generalized and simplistic, even scripted; they were not designed to elicit parents’ deeper concerns of the school’s needs as well as its strengths.

Complaints were made that there aren’t enough staff for students requiring special services and that Emotional Support class size is too large. Parents agreed that classes in general are too large (at 30:1 ratio) for their student population and that additional adult support needed in all classes. They said that there were no gym or music classes, although the school does have art. They want more extra-curricular activities for children that would inspire and interest students and provide opportunities to build self-esteem and bonding among students. Parents were united on wanting support programs for students and parents.

Shira asked parents if cuts have affected school progress and got a resounding Yes! Parents felt that the teachers and staff generally had too much to do and needed more support. Parents all seem to like and support Mr. Parker and are happy with change in school so far this school year.

“The School District needs to come out two or three times a week to observe instead of just cutting”, and “Our kids are not just a number.”

No general meeting was held prior to or after breakout groups. On the previous night, FACE held a scheduled a meeting for which they had done outreach to parents, but only seven parents attended. (This meeting was not publicized on the SGS page of meetings on the SDP website.)

Present: Dr. Lori Shorr, Ebony and Monica from Temple as facilitators; several Rhoads teachers; a teacher from a nearby school; Adina Shapiro from ArtWell (a non-profit working at Rhoads); two parents who identified as Democratic committeepeople; about ten other parents and six children; Lynda & Karel from APPS.

There was much less district presence at this second meeting. Chris Davies from the district’s SGS office was present when community members arrived, but left before the breakout group began. Thus, there was no SDP staff available to answer questions in breakout groups, leaving Temple moderators to answer frustrated participants’ questions. No Cambridge staff was seen. There was one Rhoads teacher of eleven years in the breakout group.

We were told that the plan for the evening was to have two different groups—one for any parents who returned from previous night and another for new parents. Only two parents came who had attended the previous night’s meeting, one a grandparent who knew Rhoads generationally, the other a parent who appeared knowledgeable about the district and said that this process was about privatizing schools for business gains. She reported that she had approached both Representative Dwight Evans and City Councilwoman Jannie Blackwell about this meeting; she said that Blackwell told her she knew nothing about the meeting or what was happening at Rhoads. Because the returnee group consisted only of Dr. Shorr and only two parents, they decided to join the group of first-time parents.

Temple coordinators asked their scripted questions, but parents did not answer most of them because they did not address their concerns, including:

A Spanish-speaking parent arrived with her first-grade child. There was no translation available. I told Dr. Shorr that this had happened at another meeting and that Temple should be providing translation at every Priority meeting, as it is at all SRC meetings. She seemed surprised. Fortunately, Max Rosen-Long was able to translate for the parent.

Ms. Davis-Bowie began the meeting by noting that Rhoads had been “selected” by the district, as if this designation were some kind of honor. During the re-showing of the Power-Point presentation that followed, I asked whether it would be posted on the district website. When I asked whether printed copies were available, Mr. Stewart then distributed them to those in the room. Was he hoping no one asked? Two pieces of chart paper with questions had been posted; we were told we could post our own comments later. The questions were:

There were post-its already attached; they might have come from the teacher meeting held just before the community meeting. No one added anything during this meeting.

Ms. Davis-Bowie reiterated that both permanent closure and being turned over to a charter company are off the table. There were no other options listed on any Power-Point slide. Mr. Finn delivered findings from two days of observation in 21 classes. I reminded him that it was the beginning of the school year as well as an extremely short time frame for all this data collection. Dr. Shorr said that Temple’s information came from the following respondents: 51 parents, students, and family; 8 staff members; and 36 community members. She did not address the issue of overlapping roles in the school community. There are 630 students enrolled at Rhoads—how representative can these numbers be?

Dr. Shorr went on to say that not enough time is being spent on students actually learning a concept because teachers have to move on with the curriculum, thus blaming teachers instead of the curricular demands actually imposed by the administration.

During the Q & A session, I pointed out that Cambridge is again using incomplete information in its report to the district, just as they did last year. Finn responded by saying that their report is “a snapshot”, that they will present their report and the “school leader” can respond. When asked if teachers could respond to the Cambridge report, Stewart repeated that only school leaders could do so. David Hensel asked whether, or how, FACE representatives helped parents in creating a SAC at Rhoads. FACE staffer Angela Burton gave some examples of how FACE is “building a bridge” to the community, and she said that because Dr. Hite wants volunteers in schools that clearances are now free (which might explain why schools have volunteers in libraries instead of actual librarians). Hensel went on to suggest that teachers also be involved in the outreach. The Rhoads teacher asked Finn how many surveys had been returned; he said didn’t know. The district is paying Cambridge $100,000 for this project.

Shira Cohen questioned Stewart about schools developing their own plan; he answered that a timeline for a plan is coming after this feedback meeting. (Note: Last year nine of the eleven Priority schools submitted plans; only four were accepted.) Stewart said they don’t want to tell schools to start submitting a plan now if an outside partner had already been chosen for them. Cohen then asked if there is a chance for the school to respond to a proposal for an outside partner. Stewart said that there is no formal appeal process. He said that the selection of partners goes on through the district’s procurement process and that they currently have a list of 15-16 “qualified” partners. I asked for a copy of that list and he said he would send it to me.

Parents said at every one of the Rhoads meetings that what the school needed more than anything was more teachers and support staff. I asked why the district was spending money on consulting contracts instead of more teachers and staff. Davis-Bowie responded that adding staff isn’t always the answer and that if Rhoads were to be placed in the Turnaround Network, the school would get more teachers. I pointed out that schools can only stay in the Turnaround Network for three years, and after that the funding disappears. Stewart then said, “We want the school to move out of this situation within a 3 to 5 year time period”.