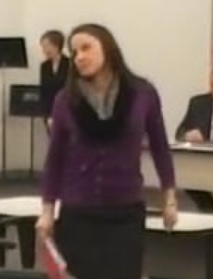 Click the picture to view the video of Nicole’s testimony.

My Name is Nicole LePore Jackson and I would like to thank you for allowing me to speak with you today in regards to our contract negotiations. I want to start by saying, I was meant to be a teacher, more precisely I was meant to be an urban educator. I have spent the last 8 years in the Hunting Park section of the city teaching at Bayard Taylor Elementary. Over that time I have become a part of the community I serve and have forged strong relationships with many families. I love what I do and want to continue doing it, but that is becoming increasingly more difficult for me. I understand that money is tight and the district does not want to agree to something they would not be able to maintain. Well money is tight for the educators of Philadelphia.

Four years ago, before i had 2 children I was making 56,531 a year and barely making it between the cost of living and a heap of school loans. Now I still make 56,531 before taxes and spend 22,000 a year on daycare and 10,000 on student loans. I can no longer afford to choose between spending my money on pencils, paper and basic supplies and buying my 2 children the things that they need.

The school district has a vision for its children, in which all students are 21st century learners that are college and career ready. The citizens of the city of Philadelphia also have a vision where schools are the center of the community and are a bright spot on the city’s resume. There should be a reason for families to move here and stay here. Right now the SRC, and the city of Philadelphia are failing in respect to their commitment to the children of Philadelphia. Every child deserves to receive a quality education no matter what neighborhood they come from. Schools are not bringing in people in droves, instead, families and their tax dollars are leaving the city.

The city can no longer afford to spend money on legal battles with the pft, instead we should be working together and spending money on what is most important- things that affect the children directly, like the teachers that care for them everyday.  Teachers are the most important tool and have the largest impact on a child’s success. An exceptionally qualified, dedicated, highly credentialed teacher is more valuable than any other factor that the school district spends its money on. The School District of Philadelphia and the city need to understand that unhappy teachers are not healthy for schools and children. The teachers in the school district are unhappy and it is causing many to leave. Highly qualified teachers are finding jobs in other districts where they are treated like the professionals that they are and being paid appropriately. In the past five years, teachers have been asked to work short staffed with crowded classrooms and a minimal amount of supplies, all educators have stepped up to the plate and done what’s been asked of them without being compensated in any form. We are asking, that you do the same by coming up with a fair and equitable contract. A contract that serves the children of the city of Philadelphia and their families. The SRC, Dr. Hite, city leaders and the PFT all need to work together to create a fair contract that is fiscally and morally responsible for all sides.

I would be devastated to have to walk away from a job that I love, with a community that I am invested in, and students that make my job worthwhile. But the educators of Philadelphia are being given no other choice.