Skip to content
HomeLisa Haver’s response to the interruption of her SRC testimony at the November 19, 2015 meeting. 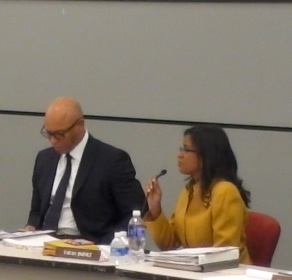 Bill Green complained at last Thursday’s SRC meeting that speakers were not following the rules.  But the SRC showed once again that rules don’t apply to them.  Or that they can just make one up on the spot if it suits them.

The SRC listed Resolution (A-18) approving a “Settlement with APPS and Lisa Haver” regarding the suit we filed November 2014 regarding the SRC’s violation of the PA Sunshine Act after the SRC’s stealth meeting in which it voted to cancel the PFT contract.  Except we don’t have a settlement.  The resolution was listed online up until the day of the meeting; that’s why I signed up to speak on it.

When I began to speak, Commissioner Farah Jimenez, who was in consultation with district Chief Counsel Michael Davis, interrupted me and told me that I could not speak on the resolution because it had been withdrawn by the SRC.  I told her that no one from the district had called me to tell me that it had been withdrawn the same day as the meeting.   She wanted to invoke an imaginary rule to find a way to silence me (or put me at the end of the list at #73).

Commissioner Jimenez seemed to be engaging in a public display of attempted retribution because APPS has called on the Governor to remove her for multiple acts as a public official which appear to be clear conflicts of interest.

Of course, the rest of the SRC just sat there and let her do it. Marge Neff watched silently as one Commissioner publicly attempted to usurp her power as Chair. No one Commissioner has the power to decide who speaks or when.  It was the people in the room who stopped Jimenez’s transparent abuse of power, not the public officials who play fast and loose with the rules.  Or make them up.