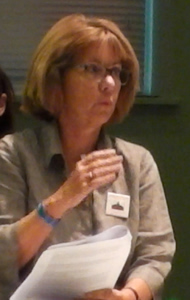 Good evening. My name is Lisa Haver. I am a retired teacher and member of the Alliance for Philadelphia Public Schools.

In regard to Resolution A-23, there is no settlement yet between the parties. Since my name is on that resolution, I want to make sure the public understands that. After 10 months, of course, there should have been a settlement, but the fact is that there is not. I will ask again, for the third time: At what rate is the SRC paying the firm of Blank, Rome for their work on the Sunshine Act Complaint? Because taxpayer money is being spent, this is public information. It is understandable that the SRC does not want to tell the public how much it is paying a law firm to drag out what is actually a pretty easy case to settle.

A recent article in the Philadelphia Inquirer looked at the salaries of the highest-paid public employees in the city. A list of 65 people making over $165, 000 was compiled. Nine of those positions listed are held by district personnel, most of them probably in this room. Dr. Hite is #2 on that list. Six district positions have salaries above that of the city’s District Attorney. You would think that at those rates we would be getting some world-class management.

Of course, the newspaper stories on the debacle caused by the outsourcing of substitute teachers makes clear that we are paying filet mignon rates for hamburger services. You don’t need an MBA or a law degree to predict that slashing salaries does not result in more people wanting that job.

So it’s hard to believe that Dr. Hite and the SRC would continue on its path of privatizing school health services. If they do, it will be with the full knowledge that outsourcing student services does not work. If they willfully ignore that fact, and hand over the reins to another unqualified for-profit company, the result won’t just be teachers having to cover more classes because there aren’t enough subs. We will see the same kinds of tragedies that we saw when students lost their lives when there was no school nurse in the building.

Now is the time to disband the selection committee (can we get a list of the persons on that committee?) and pull the plug on another potentially more disastrous SRC scheme.