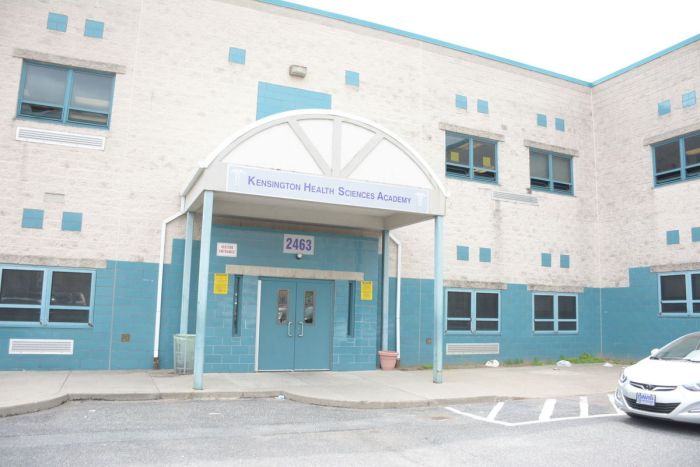 Kensington Health Sciences Academy is a neighborhood high school at 2463 Emerald St. The enrollment in 2015-16 was 442, but the school has a larger enrollment this year. The student body is 56% Latino, 32% African-American, 7% European and 1..4% Asian. 28% of the students have disability IEPs, .5% are gifted, and 18% are English Language Learners. 100% of the student body is CEP Economically Disadvantaged.

KHSA Principal James Williams said that people have been asking him why KHSA has been included in this process. He did not know but said he’ll use this process, at the very least, to get KHSA’s assets better known to the city. That’s assuming that he will have any influence in the outcome, although information learned at previous meetings indicates that Dr. Hite will be making the decisions about the outcome of the schools.

Christopher Finn from the Cambridge Team gave his own personal background and that of Cambridge. Cambridge has done consulting work in Virginia, D C, Boston, New York, among others. Finn has been an educator in the Bronx and in Newark.

The first focus group was scheduled for the following week. That process will include sharing main findings with the principal. Within 72 hours, the principal will receive a written version of these finds.

Neither district nor Cambridge representatives got to the official presentation because the audience was so adamant about being heard and about being part of a meaningful process in deciding the school’s future.

KHSA parent Orlando Acosta asked how much Cambridge was being paid ($200,000). Acosta noted that other districts had given Cambridge negative reviews; he also pointed out that Cambridge has no knowledge of Philadelphia. He said that schools were being “blind-sided” with this effort and referred to “evaluation” as a code word: the last time schools were “evaluated” they closed 23 schools. He pointed out that KHSA was budgeted for 326 students but wound up with over 500 students and not enough staff support.

Dean of Students Ed Green asked, “How do you evaluate the fact that our staff doesn’t just work here; we’re on a mission? We have long-standing families. I want to see where in the evaluation they note how the staff takes care of the students; how they quantify the love and care they give their students.’”

A parent whose son was new to the school said that the enrollment overage was an accident caused by the district and that the numbers and statistics can be confusing. She emphasized that this is a public school. Her son had had problems before coming to KHSA, but now he’s flourishing. She pointed out that staff lives in and is part of the community. She asked, “How do you judge a school in 2 days? Would you expect me to judge you in 2 days?”

Roesser then said that despite the uplifting response from audience, “Our children will be judged by their achievement tests and performance in school.”

Roesser cited a 30% rating for “School Climate”. He also pointed out how those climate scores were dependent on how many surveys were returned to the school from the parents. So a lack of incoming data actually lowers the scores!

Several teachers stated they were confused by the data being cited by the district. How can they get zeroes for “Climate” and less than 1% for “College and Career Readiness” when KHSA has a 100% graduation rate and an emphasis on functioning CTE programs? They were sure the numbers were faulty.

APPS member Lisa Haver reminded those present about past school closures and turn-arounds. She noted that last year Wister Elementary was given to Mastery even after the SRC admitted that the data they used was incorrect. She pointed out that when the SRC went after Steele and Munoz-Marin elementary schools two years ago in a long, drawn out process, many of the staff felt forced to transfer because of the uncertainty of whether they’d be forced to leave if a charter company took over. She noted that “every time a school is put into some sort of process, it revolves around staff, and even principal, changes. Every year there’s this trauma – there’s a different way it’s said each time, but it’s still trauma heaped on the school students, staff and families. Somehow it’s never the fault of the loss of programs and services like counselors, nurses, librarians, special ed staff, etc. by the School District. It’s always portrayed as the fault of the staff.”

APPS member Lynda Rubin noted that Cambridge representatives had said that they were going to give “facts” to Dr. Hite who’d make his decision. But she said that the parents won’t be able to come back and question Hite’s recommendations. Mr. Finn admitted that he’d said at another school that once the Cambridge report went to Dr. Hite, it would be owned by the district, which would have total control as to who got to see it. She also noted that the question is not whether to enact any of the 5 choices, but which of the 5 choices would be made. She questioned the programs and staff supports that have been taken from the school in the last few years, including lack of substitute teachers and sufficient number of staff to keep class size down, as well as other programs that have contributed to the declining bottom line of test scores in the schools.

APPS member Tonya Bah, a district parent and public school advocate, asked whether anyone in the District offered the principal the $200,000 (that was being paid to Cambridge) to see how he could use the money for the benefit of the school. She asked Mr. Finn, “Where’s the template or formula for the evaluation that will inform the decisions of what happens to the schools?” She said that the parents and students who will be affected by the changes want to know that information. She pointed out that the SRC has made a lot of money for the School District’s budget by cancelling the PFT contract and using the money they should have paid to teachers for the last 3 ½ years for contractual step increases, as well as the money from staff who were laid off, all of which has hurt children’s education.

Students from Youth United For Change asked why KHSA was targeted for this process just after it was designated a Community School. No answer was given.

The principal tried to calm everyone down and assert that education was more than just data, that there are amazing things that are happening at the school and this would be shown in the process. He also talked about how the Kensington Health Community School model will be an example for other schools to follow. He talked about all the community projects that the school already has like City Year and Americore volunteers in 9th and 10th grade classes.

Mr. Clark, a KHSA teacher, asked the district staff: “If you think it’s hard to get to everyone’s question here, try doing it with 51 students in a classroom, one third of whom are special ed. If I didn’t get to each student, I’d be sued!” He noted that the school lost 40% of its Special Ed department this year and asked, “What would happen if your department lost 40% of your staff?”

Mr. Finn from Cambridge seemed surprised by the passion expressed by the parents and community members. Much of the information given at the other school meetings was not presented here.

Mr. Roesser stepped up and angrily denounced the tone of the questions, in particular those which challenged the district’s evaluation data. He told the audience: “This process IS GOING TO HAPPEN!” A KHSA school police officer stepped up to calm the group down. He said that Mr. Roesser was at the meeting to support Mr. Williams and the school. He urged the group to participate in the focus groups. He complimented Youth United for Change, the staff and parents for all they’ve done. He expected that if there were a fair, unbiased assessment, the school would be fine.