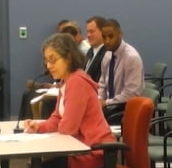 I am Karel Kilimnik, a retired teacher and co-founder of the Alliance for Philadelphia Public Schools. I am at every SRC meeting asking questions that usually are not answered. I spent two days at City Council this week. The first day was listening to Dr. Hite, Ms. Neff, and district staff trying very hard not to answer council’s questions. At one point Dr. Hite proclaimed “supplies are no longer a problem”. Really? Councilwoman Gym asked CSO director Dawn Lynn Kacer what is the estimated success rate for renaissance charters? Her answer? Kacer asked Councilwoman Gym what she meant by success. Councilwoman Gym said “schools that are not failing”. Kacer then responded by saying that no renaissance charters have been closed. And so it went.

I am speaking about resolution A35 the $42 million contract with Kelly Services to provide substitutes for the district. It seems that everyone in the city recognized Source4Teachers is an abysmal failure except for Dr. Hite and whoever decided to hire them. Instead of returning to the district/PFT plan that had a significantly higher fill rate, Dr. Hite shifts to another private company. Over 5,000 students were in classes without a regular, certified teacher for this school year. Would this happen in Abington or Lower Merion? Never! And yet here we go again down the path of private companies attempting to provide services and turn a profit at the same time . The Broad- trained Dr. Hite continues his plan to destabilize the district and roll back union membership. The district/PFT arrangement regularly hired retired teachers to fill sub positions. Many returned to the school they retired from where they knew the students and then came Source4Teachers that totally disrupted the system.

Presently Cooke, Huey, and Wister teachers are interviewing for positions. They have to leave their schools & use their personal time for the site selection process. They have been given no priority despite the rug being pulled out from under them. Their students face more upheaval next year with new school managers bringing in their own teachers. This same process is going on at 4 turnaround schools that get to keep 50% of their teachers. And then there is Kenderton where Young Scholars just announced they were pulling out of their 5 year contract because the students cost too much and they weren’t making enough money. Is this anyway to run a school district? Giving schools to charter operators who then leave and parents have no appeal process?

Why would anyone want to work for a district whose leadership is so hostile to them? In 2013 the SRC terminates the PFT contract. They lose in two lower courts, and appeal to the state supreme court where a decision will be made. Our tax dollars pay the legal fees. There have been no raises since 2012, no step system is in place, and positions are continuously lost due the renaissance charter school program and turnaround schools. Over size classes abound impacting over 13,000 students, prep loss is rampant due to the shortage of substitutes. Dr. Hite, your administration with the blessing of the SRC has created this situation over the four years you have been here. You continue hiring administrators at high salaries while our students suffer. It’s time for you to pack your bags and go.