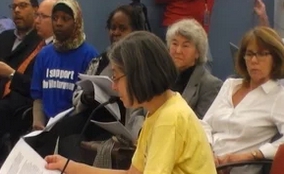 I am Karel Kilimnik, retired teacher, PFT member, and co-founder of the Alliance for Phila. Public Schools. I want to refute Mr. Green and Ms. Jimenez’s ongoing comments about how financial distress cannot be considered when approving charter school applications. According to attorney David Lapp since the District has been declared to be in “fiscal distress” and the state Constitution still requires that there be a “thorough and efficient system of public education,” the impact of charter expansion on all students should be the most important consideration of all. The bottom line is that there has never been a court holding that a fiscally distressed school district is prevented from considering the educational impact on all students, including students in district schools and existing charter schools, when deciding whether to approve a new charter school application. In addition, no cases have addressed these issues since the charter reimbursement was eliminated.”

Now I want to describe the stance taken by the SRC as regards listening to school communities. At no time since Dr. Hite’s announcement in early October placing 3 schools into the Renaissance Program has a SRC commissioner visited Wister School to hear that school community’s concerns about being placed in the Renaissance Charter Program. Parents reached out to Ms. Simms after she made her last minute motion at the SRC meeting on Jan. 21st. Earlier this week I watched a live stream video of Ms. Jimenez, Ms. Simms, and Mr. Green lined up on a raised platform at the SLA at 22nd and Arch. Mr. Green said he was there “to gain information to make an informed decision about the relocation of this school.” Ms. Jimenez said “she wants to hear community voices before we make any decision.” Chair Neff sent a message saying she wants to hear what you have to say.

It is admirable that 3 members of the SRC came out to one school to discuss its future. That school is not facing closure or takeover by charter or loss of all of their staff by being placed in the turnaround network.  Their problem is that they may have to relocate as the district is spending a lot of money each year to keep it in its Center City location. Why is that same concern absent from Huey, Cooke, & Wister school communities. Where is their concern about hearing from these school communities? Where is their concern for the 4 schools placed in the Turnaround Network -Mitchell, Roosevelt, Rhodes, and Muniz-Marin who stand to lose their principals and teachers?

Mr. Green you said “I’m an oral learner. I learn through dialogue. We did not make a decision before coming here. This seems to be a change in your attitude toward community engagement which we welcome. Will the Wister parents see you at their next meeting after spring break?