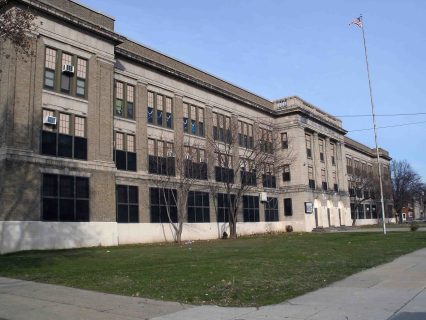 Warren G. Harding Middle School is a 6-8 grade school at Torresdale Avenue and Wakeling Street in East Frankford. It has an enrollment of just under 800, down from the years when over 1200 students attended. The first community meeting was held on Tuesday October 18 at 8:30 AM. Four administrators from 440 attended: Sherrie Williams and Zachary Epps from the Office of Family and Community Engagement, Communications Director Kevin Geary, and Melanie Harris. Three parents and one APPS member attended. There was no Cambridge representative present.

District Superintendent Jeff Rhodes and Principal Mary Sanchez gave the presentation. They showed the “pockets of excellence” map and said that despite investments made in the school, the SPRs for the years from 2012 through 2015 showed that the school was not achieving. Only 29% of the students were attending more than 95% of the school days. Rhodes told us that the district wanted our “high-impact ideas”. He said that no schools “in this process” would close or be made charters this year.

Prinicpal Mary Sanchez, who was appointed last year, encouraged those present to attend the focus group meetings: Thursday October 20 at 4 PM and Friday October 28 at 4 PM.

The five options were shown on the slide, but no details were given for any. I asked which “high-quality” school Harding could merge with; Rhodes said that this was not an option. One option was “reopening”; I asked how long the school would have to be closed. Rhodes said that the school wouldn’t actually close, but it would restart after significant staff changes. Harding has lost many teachers in the past three years. At least 25 members of the staff have come in the past two years. It wouldn’t make sense for the district to get rid of people who just got there.   It does seem that most of the options would result in major staff changes. Being placed into the Turnaround Network guarantees staff replacement and possibly principal removal also.

I asked what investments Hite was talking about when he said the school was failing “despite investment” made in the school. I taught at Harding for ten years, until 2010. During that time, Harding had 2 counselors, 2 Assistant Principals, 6 NTAs, an in-school suspension room (the ALC), a library with a full-time certified school librarian, three secretaries and a parent/community liaison. Harding now has no library, no NTAs, no APs, no ALC, no parent liaison, one secretary and one counselor. In 2013, after Hite laid off every secretary in the district, Harding did not have a secretary until November. Last year, the school did not see one substitute teacher until just before Christmas break.

The three parents present did not react well to the idea of losing any staff. They supported the teachers and did not want any more upheaval. They seemed very supportive of the principal.