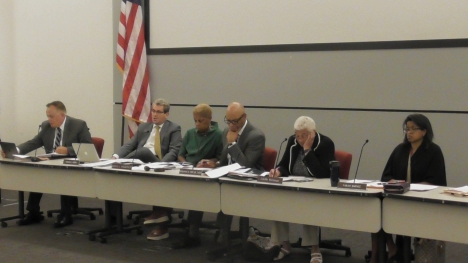 Alert: The SRC posted its resolution lists and summaries on Monday December 4. On Friday afternoon, they added three additional items: renewal votes on Aspira Olney and Aspira Stetson, and a vote on the revocation of Khepera Charter. These items are not formal resolutions, as they provide nothing other than the topic of the resolution—they do not state exactly what the SRC will be voting on. That is a clear violation of the PA Sunshine Act. After having postponed renewal votes on Aspira Olney and Aspira Stetson for a year and a half, the SRC is now poised to take a vote of some kind on these schools. The SRC’s Charter School Office, citing failure to meet academic, organizational and financial standards, recommended non-renewal for Aspira Olney and Aspira Stetson in April 2016. Stetson’s charter expired in June 2015, Olney’s in June 2016. APPS has asked the SRC several times in the past nineteen months for an update on these renewals; the SRC has refused to tell APPS or the public what its intentions were. We don’t believe that it is a coincidence that Aspira Inc. submitted applications for two new charters last month. Given the SRC’s history, we expect the SRC to rush through the votes on these schools without any explanation or deliberation. In fact, we fear that the SRC will be doing this on many issues in the six months before its official dissolution. It is crucial that parents, community members and elected officials keep a close watch on the SRC between now and July.

Last month we celebrated the beginning of the end of the 16-year reign of the state-appointed School Reform Commission. This month we continue to work with the communities of the six Priority Schools as Dr. Hite is expected to announce his decision on their fates in January or February. Both Mayor Kenney and Dr. Hite have said the district intends to close even more neighborhood schools. At the same time, nine charter companies, including Aspira and Mastery, have submitted applications to open new charters or expand existing campuses. Will these announcements occur during the busy holiday season?

The march of the Edu-vendors continues as more “partners” market their professional development and data collection wares. The board of the Philadelphia School Partnership has chosen to give more money to an SLA school; no question the SRC will approve without discussion of why private organizations have the power to decide which schools receive additional funding. Dr. Hite is making good on his 2013 promise to outsource Head Start services to private vendors. The district is proposing to sell the Beeber Wynnefield Annex for a song twenty years after its closure.

While keeping an eye on all of these issues, we await Dr. Hite’s announcement of which schools will be closed this year or next. Elementary schools Sheppard and EM Stanton were slated for closure in 2012 but remain open today. Why? Strong and sustained organizing of parents, students, community, and the school partners who showed that it is possible to fight back and win. Kenderton parents did not give up fighting for their school after Renaissance provider Young Scholars abandoned them. They came to the SRC, met with the superintendent and other administrators, and refused to stop fighting for their children and their school. This year Kenderton has additional faculty and staff, a veteran principal, and lower class size in k to 3rd grade. The district didn’t try to sell the idea—as they are to communities of this year’s Priority schools— that all the school needed was (yet another) outside company, like Jounce Partners or ISA, to “turn around” the school.

…that $800,00 from PSP were used to restore extracurricular activities in schools? Is the Hite administration ever going to bring back the after-school activities, the interesting and innovative electives, the drama/journalism/art/photography clubs?