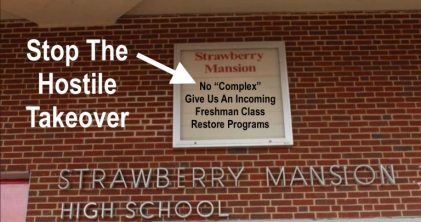 The very first paragraph of the flyer is titled “Strawberry Mansion is NOT closing.” Apparently this is to reassure the community that Strawberry Mansion will not become an abandoned building, thereby contributing to a downward spiral like so many seen in so many low-income communities that have lost their community school, but, after it has been emptied of students and community control, it will be replaced with such corporate entities such as what Hite called in his SRC statement the Energy Performance Pilot School. (Note the corporate company Hite keeps to bring this about.)

The next paragraph is headlined “Few students are choosing Strawberry Mansion now” going on to state that the school currently has 294 students. The implication is that the students and the community are to blame for the school’s current lack of support.  In April of 1992, Strawberry Mansion had 1,600 students. The school was known for its science club named Science Force 2000 that won many awards. It had thriving art and music programs. It had begun to revive its football team that had been suspended for many years. Heroic efforts were made in the recent past to turn the school around with little support from the District.

How did this declining enrollment happen? The school had major problems such as a high dropout rate and frequent violent incidents. This was reflective of the social and economic conditions where the students were coming from. In 2013, however, the Commonwealth of Pennsylvania took Strawberry Mansion off of the list of “persistently dangerous high schools”. However, in May 2013 the school only had 435 students.

On December 14,  2012 the District announced Strawberry Mansion was one of 22 schools that would be closed. After massive community opposition, the school was later taken off of the closure list but nothing was done to change its starvation budget. This certainly didn’t help the downward spiral of the school.

Was there a war that caused the decline in enrollment? Actually there WAS an economic, social and psychological war waged against the school over many years. The school’s mascot for their football team is a Knight. They have a Knight in armor in their lobby. This is appropriate because in the last ten years the school has been under siege. In the Middle Ages, if a king wanted to take over a town, he would have the town surrounded by his Knights and cut off all commerce in and out of the town. When the town was reduced to starvation, the Knights could easily occupy the town. This is what has happened to Strawberry Mansion. For ten years, like all public schools in this period, it was starved of resources, for classrooms, lost counselors, had a part-time nurse for many years, and lost a library with a certified librarian. In addition the school has been made even more unsafe with the removal of Non-Teaching Assistants and classroom assistants who had ties to the community. Instead of putting resources into the school such as lower class sizes and returning support staff, the school was pushed over the cliff.

At the April 26th SRC meeting, community members spoke in support of their school. Note the timestamps in this link for speakers from Strawberry Mansion where they describe what it is like to live in a school under siege. Many music, culinary arts programs, sports, science, after school programs, library and literacy programs and more have been cut because they have not been staffed.

The next paragraph in the flyer is titled “Hundreds of neighborhood children are going to alternative education programs in other parts of the city.” People do not casually travel long distances away from their community school to go to an alternative school. The lack of support was obvious and at the same time alternative programs such as charters were receiving millions of dollars from philanthropists that made them an appealing alternative. The feeder schools of students for Strawberry Mansion received various forms of privatization. Blain and Kelly were made transformation schools with $1.5 million from the Philadelphia School Partnership (PSP). Douglas became part of the Mastery system of schools. Gideon became a Priority School. Rhodes went from a middle to an elementary school in a Turnaround Network. LP Hill and Whittier were closed in 2013.

Recently PSP gave a $945,000 grant to KIPP to open the North Philadelphia Charter School. Kipp has several charter schools in the Strawberry Mansion community. This was part of the starvation of the school through depriving it of enrollment.

The flyer ends with the heading “We are adding academic options that neighborhood students want.” It lists accelerated school, the Educational Options Program; project based learning, workforce development, and expanded recreational opportunities for neighborhood development. Nothing is said about who will fund these programs, but you can bet that, based on the millions spent by the SRC each month on outside contractors, this “Education Complex” the corporate interests envision for the community will be funded and obligated to them. Why weren’t such programs developed by the School District ten years ago with public funds when Strawberry Mansion was a thriving school, with many problems, but great potential?

This is the end game of all the chaos and shattered dreams of a generation of students at Strawberry Mansion. This was not done ten years ago with public school programs because it did not fit in with the corporate privatization agenda. Whether the author of this leaflet knows it or not, hiding in plain sight is the agenda of this ten year plan, probably developed by the Boston Consulting Group in 2012, a management consulting firm experienced in hostile takeovers in the corporate world. It was a plan carried out by stealth by a series of Superintendents from the Broad Foundation. All of this chaos is to drive students from Strawberry Mansion in order to bring in outside contractors to provide corporate education technology and other programs and to transform Strawberry Mansion from a public school responsible to the community into a school contracted to corporate profit making interests for whom education is secondary.

SDP Data – Selected Schools compiled by Catherine Blunt, a supporter of the Strawberry Mansion School-Community. The information was compiled from the SDP website: demographic and climate data is from 2017-2018, and Keystone scores, grad, and 1st year college data is from 2016-2017.

Ken Derstine is a retired Philadelphia public school teacher. He writes based on 37 years of experience and obervation in the School District of Philadelphia.