Skip to content
Home2018March
The day after the schools closed for spring break, district stakeholders woke up to find out that major changes have taken place in the governance of the city’s public schools.

In a surprise move, two members of the SRC have resigned, and they have already been replaced by two people chosen by the mayor. The governor has already named the new chair. No mention of these changes was made at last week’s SRC meeting.These changes, planned and implemented without consultation of district stakeholders, serves to highlight the disenfranchisement of the people of the city when it comes to choosing those who make decisions on the future of the city’s public schools. The mayor expects the public to pay the bills, including another increase in property taxes, but to have no say in how the money is spent. The stakeholders and taxpayers, apparently, are expected to play the role of passive observers watching as the pieces are moved around the chessboard.

The SRC will be approving a $3 billion budget in the coming months just before its dissolution. This lame-duck Commission will be voting on that budget.

The mayor will be appointing a new school board next week. In violation of the PA Sunshine Act, there have been no public meetings at which the people of the city could weigh in, pro or con, on the candidates, or to raise concerns about possible conflicts.

At a March 16th public meeting, the Education Nominating Panel approved eighteen additional nominees for the new school board to replace the SRC on July 1. Mayor Kenney will consider these, along with the initial twenty-seven approved two weeks ago, to come up with a nine-person board. He is expected to announce his final selection by April 5.

Click here to read the third installment of APPS analysis of each nominee.

This was a regularly scheduled action meeting, and all four of the remaining commissioners were present. Commissioner Farah Jimenez resigned unexpectedly after last month’s meeting. In her resignation letter to Governor Wolf, which gave no reason for her resignation, Jimenez said that “..it has been a gift to be in service to the students of Philadelphia.”

Ms. Jimenez secured the position of President and CEO of the Philadelphia Education Fund (PEF) in 2016. Prior to Jimenez’s appointment, PEF meetings were open to the public. However, slightly more than a year after assuming this role, Ms. Jimenez barred three regular attenders of PEF Compact meetings, including a public school parent, even though they had tickets (which were not required prior to Jimenez’s appointment). Admittance to these meeting are now guaranteed only to regular financial contributors of PEF, even though their purpose is to discuss public education; others can take their chances on a waiting list. APPS has questioned, as have members of City Council, the potential conflict of interest in serving as an SRC Commissioner while leading PEF.

Ten members of APPS were present for this meeting; four members and others testified on behalf of public education.

A Matter of Integrity 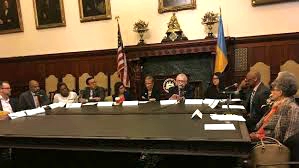 As promised, APPS researchers have completed the independent profiles of the first round of nominees chosen by the Education Nominating Panel. Mayor Kenney, in response to community protests about the possible conflicts of the nominees, and the dearth of educators on the first list, reconvened the Panel on Friday, March 16.  APPS members Barbara Dowdall, Lynda Rubin and Lisa Haver testified, again decrying the lack of public deliberations and the ongoing violations of the PA Sunshine Act.  The Panel voted to send eighteen more nominees to the Mayor.  The Mayor has twenty days to choose nine of the forty-five submitted as his final choices.

We will be releasing our extended profiles on the additional candidates later this week.

Please review our first report, as important updates and links have been added.

Click here to see the second installment of biographies
and APPS analysis of School Board nominees.