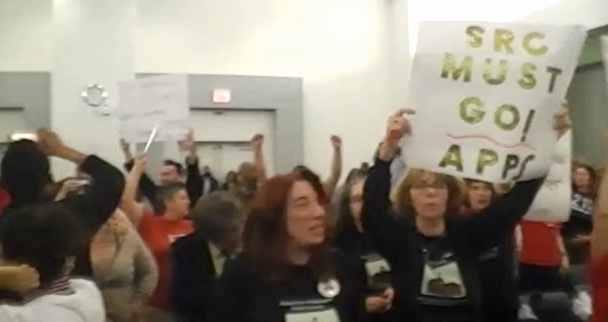 All five Commissioners were present for this historic meeting of the School Reform Commission. Resolution SRC-3— Recommendation of Dissolution of the School Reform Commission was passed at 7:35 p.m. with a 3-1-1 vote. Commissioners Wilkerson, Richardson, and McGinley voted in favor, Commissioner Green voted against, and Commissioner Jimenez abstained. This joyous occasion ended sixteen years of state-imposed control of our city’s schools. There were cheers, hugs, dances, and high-fives when the resolution passed. The tireless and persistent effort of the Our Cities Our Schools coalition of parents, teachers, students, unions, and community advocacy groups made this happen. [See APPS’ statement on the end of the SRC and what should come next.]

Our City Our Schools (OCOS) and the Philadelphia Federation of Teachers (PFT) organized a celebratory rally outside district headquarters just before the meeting. APPS co-founder Lisa Haver addressed the crowd, along with Councilwoman Helen Gym, State Senator Vincent Hughes, PFT leaders, parents and community members. There was much to celebrate on this new day, one that signaled the end of a state-imposed system that brought austerity and corporate reform for a perfect storm of devastation to the city’s public schools

Having worked for the preservation and improvement of public education for over five years as an organization, and for many years as individuals, APPS members know that this is not the end of challenges for our school system. We will continue to advocate for the what other districts in Pennsylvania have had for many years: schools that provide the education our children deserve governed by a democratically elected school board.

Some of the Philadelphia news outlets and their coverage of this important event: