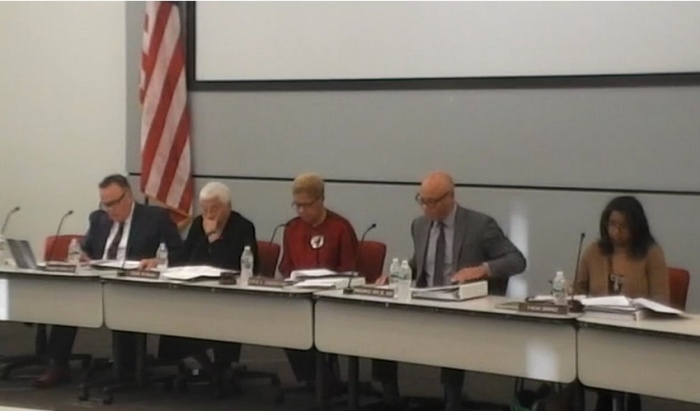 Chair Joyce Wilkerson and Commissioners Estelle Richmond, Chris McGinley and Farah Jimenez were present for the entire meeting. Missing in action once again was Commissioner Bill Green. Green has been exhibiting a disdain for his position by failing to be present for part or all of five meetings since April. No other commissioner has had such an abysmal attendance record. Green has come in at the tail end of two meetings this year, after staff presentations and public speakers, but was still permitted to vote. He has left two other meetings early only to call in by phone much later, again, just in time to vote. This time he never showed, and no explanation was given by the Chair.   Resolution B-1 Donation: $2,700,000 Ratification of Acceptance of Donation of Services and Resources from Temple University had to be withdrawn by staff because McGinley and Wilkerson abstained due to their Temple employment. That left the vote an unpassable tie of 2-2. This resolution was to accept “the donation of professional development services from Temple University to improve leadership, instruction and parent engagement of English Learners valued at $2,700,000 for the period commencing September 1, 2016 through August 31, 2021”

APPS once again calls on Chair Wilkerson to address the issue of the disappearing commissioner. If Green cannot or will not perform his duties, he should resign.

Eleven members of APPS attended the October meeting; two addressed the Commission on matters of defending public education. A number of other speakers called on the SRC to vote to dissolve itself now. When the first speaker, student speaker Samuel Dennis, requested the SRC introduce a resolution to abolish, Chair Wilkerson denied his request. The Our City Our Schools (OCOS) coalition members, bearing signs, stood in solidarity. When Wilkerson refused, the members of OCOS loudly chanted “tick – tick – tick…” for the remainder of Samuel’s three allotted minutes, (during which Wilkerson tried to bring up the next speaker) symbolizing time running out for the undemocratic, unelected SRC.

Conduct Unbecoming to a Public Figure