Chair Joyce Wilkerson and Commissioners Farah Jimenez, Chris McGinley and Estelle Richman were present for the entire meeting.  Commissioner Green was absent for the first two hours; he arrived at 6:45 for a meeting that started at 4:30, without explanation, when there were four speakers left. Green was absent during the testimony of forty-two speakers,  Superintendent Hite’s remarks,  the Policy Committee report from Dr. McGinley, and the presentation from Student Services Director Karen Lynch on the school selection process. He did, however, vote on all of the resolutions.

Before the vote on resolutions, APPS’ Lisa Haver stood and approached the front table, asking Chair Wilkerson:  Can you please read the rules concerning Commissioners voting after missing most of the meeting?  How can Commissioner Green miss the entire proceeding, arrive at the conclusion of the meeting, and be allowed to vote?  Although those questions were addressed to the Chair,  Green asked Miles Shore, Interim Chief of the district’s Office of General Counsel, to cite the rules about when Commissioners can vote on resolutions.  Shore stated that since Green was present he was entitled to vote.  Shore did not cite any policy number when giving this opinion.

Green also missed most of the SRC Action Meetings on April 20 and May 1 of this year.  He did not hear the majority of the public speakers, the staff presentations or Superintendent Hite’s remarks–yet he still voted.  As Haver said, Green personifies the SRC’s disregard for the public they are entrusted to serve. Green missed most of the April 27 2017 and May 1 2017 meetings also.

APPS again calls on Chair Wilkerson to address this issue. (See timestamp 1:58:00 in this link.) If Green cannot serve in a responsible manner, he should resign.

Sixteen members of APPS were present for this meeting; fourteen testified.

[To view their testimony, please go to APPSphilly.net.]

Our City Our Schools: SRC Must Go

When President Trump nominated Betsy DeVos, a woman with no degree or experience in education, as U.S. Secretary of Education, defenders of public education organized an unprecedented effort to fight her confirmation. Unfortunately, her stunning display of ignorance about education and the rights of public school students was not enough to stop the Senate from confirming her.  But we now know who DeVos is and what her agenda is: advancing the privatization of public education under the guise of  “choice.”  She is a government official, accountable to the American people. We can call our elected officials when she fails to uphold the rights of all schoolchildren.

But whom can we call to stop Priscilla Chan from imposing her will on public education?  Or Laurene Jobs?

Priscilla Chan is a physcian and wife of Facebook founder and CEO Mark Zuckerberg, now the world’s fifth wealthiest person. Laurene Jobs is the widow of Apple co-founder Steve Jobs and the world’s fourth wealthiest woman. Neither has a degree in education or any experience teaching in public schools, but both have embarked on massive projects to impose their ideological visions of education on schoolchildren across the country.

The recently established Chan Zuckerberg Initiative is funding the development and distribution of software that would create an online profile of each student’s “strengths, needs, motivations, and progress” and may, according to a June Education Week article, “help teachers better recognize and respond to each student’s academic needs while also supporting a holistic approach to nurturing children’s social, emotional and physical development.” That’s a tall order for two young people with no background in child development or education—unless you count Zuckerberg’s foray into education reform in Newark in 2014, when his $100 million grant enabled Gov. Christie’s disastrous privatization scheme. Zuckerberg, who has never lived in Newark, later told a reporter he “learned a lot of lessons from that.”

Meanwhile, CZI is investing in lobbying for legislation that would enable the imposition of this unproven program in schools and districts across the country in the same way the Bill and Melinda Gates Foundation successfully lobbied for the use of Common Core standards in all 50 states before they had been tested in a pilot program.

Laurene Jobs graduated with a degree in economics from Penn, ran a natural foods company and worked for three years at Goldman Sachs as a trading strategist before marrying Steve Jobs. None of that qualifies her to even teach in a public school, but her massive wealth apparently makes her an expert in the history and curriculum of public education, as well as child development and pedagogy. Recently, Jobs and her XQ Institute bought an hour on the four major TV networks to simulcast a star-studded (but not educator-studded) extravanganza  to hawk her plan to “reimagine” the country’s high schools — mostly by using more technology.  Has Jobs found some research that shows teenagers need to spend more time looking at electronic devices?  When you run a technology company, not surprisingly, the answer to everything, including the things you know nothing about, is more technology.

Over the past 20 years, education policy has increasingly been enacted not to satisfy the needs of the students and their families, but the wants of the wealthy and powerful who are converting public education from a civic enterprise to a marketplace for edu-vendors: the Bill and Melinda Gates foundation has paid to expand charters and lobby for the use of Common Core standards in all 50 states; real estate and insurance mogul Eli Broad now leads a group of corporate funders pushing a plan to move half of all K-12 students in Los Angeles into charter schools; the Walton family has initiated a new $1 billion campaign to promote charters nationwide; Trump financier Carl Icahn has established a chain of charters in New York City.

No one elected these billionaires, and they are accountable to no one.  We can’t call our members of Congress to object to their policies. While Americans continue to condemn the power of the very rich to influence elections, we must also fight to stop them from having more influence over the future of our young people than the constituents of democratically elected school boards. 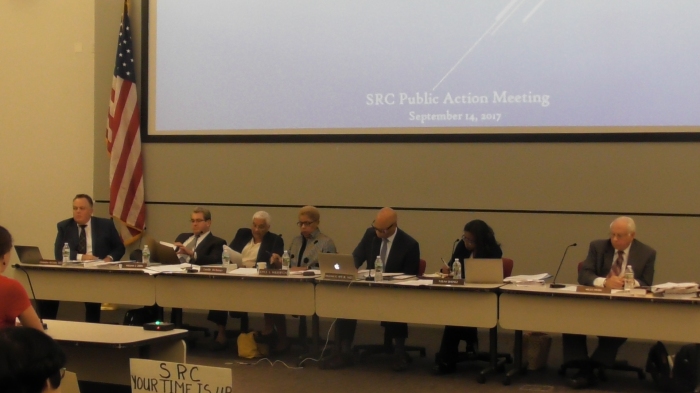 Note: The problem with the camera angle and interruptions in the field of view are due to placement of the camera. The SRC has confined our camera to a “press box” which is located in the middle of the audience thus the quality of the video.

Note: The video will not load using Firefox.

These are the transcripts of some APPS members’ testimony at the SRC meeting in order of their appearance.

As students flock back to school this September we see a more modest list of resolutions. The list may be small but the implications loom large. How does a large district ensure that every school has what it needs? These resolutions illustrate the chasm of inequality among the city’s schools. Some are chosen to benefit from private funders such as the Philadelphia School Partnership while others still lack the basics of a stable workforce of teachers and principals. This is in no small part due to a Broad-graduate led administration that promotes a portfolio of options instead of ensuring every school has what it needs.

Please keep in mind that for the past five years, Dr. Hite has announced his latest transformation/turnaround plan in October. He has stated, at SRC meetings and in City Council, that he wants to close three schools a year over the next five years. A resolution usually pops up in October which indicates in some way, usually not in detail, his plans to close or “transform” a school. Internal turnarounds, however, do not have to be approved by the SRC; those always result in forced transfers of most faculty and often principals. That includes Transformation, Redesign, and others that are placed in the Turnaround Network. Last year Hite targeted eleven schools as “Priority Schools” causing much transition and confusion as teachers and principals were forced out of their school communities. The only resolution put before the SRC was one to approve a $200,000 contract with Cambridge Education for writing a report after holding meetings and performing nominal site visits. The previous year Hite placed three schools into the Renaissance Charter School program over the wishes of parents and community members. Three years ago, parents at Steel Elementary in Nicetown and Munoz-Marin in Fairhill voted down Hite’s move to give their schools over to charter providers. Who is on his hit list for the 2018-19 school year? APPS has prepared a tip sheet for how to protect your school. Start organizing now.

The New Teacher Project (TNTP – A3) continues to feed at the public trough. How much more money is going down this rabbit hole to support a private company using faulty data and flawed research ?

Artwork (B9 ) swiped from district schools over 10 years ago by then-CEO Paul Vallas is now on display at the Michener Art Museum in Doylestown through January 12, 2018. This artwork was bought decades ago for the students in this district, and it still belongs to them. The SRC should vote to return it to the district schools as soon as possible.

The Camelot company (A17) gets a really good deal on renting space at the former ES Miller School to operate a program for “over-aged middle school students”. According to community activist Alicia Dorsey, there was an effort to insert Camelot into Strawberry Mansion High School without any notification to the school community. At their request, APPS members attended a meeting called by Assistant Superintendent Eric Becoates at the school in August. Becoates refused to answer a question put to him several times: Is Camelot moving into Strawberry Mansion?

(See the August 17th Ears: Parent(Pseudo)Engagement) Former Strawberry Mansion High School principal Linda Cliatt Wayman, in her August 17 SRC testimony, thanked Dr. Hite for not putting Camelot into her former school. Hite made no response either confirming or denying. The question now: Is the program at ES Miller the one intended for Strawberry Mansion or is it simply a coincidence?

The district stopped giving contracts to TNTP for unnecessary and redundant professional development and turnaround training and instead used that money to restore certified school librarians to the district?