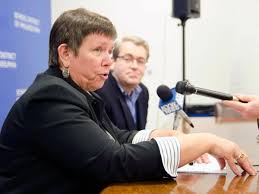 The hallmark of the School Reform Commission , since its inception, has been its contempt for the stakeholders of the district.  For years, the SRC held public meetings on weekday afternoons,  a time when most of the public was unable to attend.  They abolished their Planning Meetings, when actual deliberation took place, and went to one meeting a month.  At the same time, much of the real decision-making shifted to private venues including the boards of the Philadelphia School Partnership, the William Penn Foundation, and the Great Schools Compact Committee. That Committee was formed for the purpose of enacting the mandates of the Gates Compact, enacted by the SRC without any public vote or discussion.
This year, with no announcement or explanation, the SRC stopped holding its monthly Strategic Policy and Planning Meetings.
The rules, such as they are, for listing speakers for each meeting, have always been nebulous and secretive.  No matter when you called, or what your topic was, there was no way to know where you would appear on the list until you arrived.  Many times our members, who called well in advance, would end up at the bottom of the list.  Questions to SRC were routinely ignored; the only answer being: we do it how we do it and you have nothing to say about it. The most egregious example of this abuse of power was APPS member Lisa Haver placed at the bottom of the list–# 65—at last month’s meeting, even though she had called weeks before to register.
At the December 2015 meeting, Chairwoman Marjorie Neff announced that rules for speakers would be changed. The SRC wanted to give priority to those who had not spoken before.  The new rules,  posted on the district website, stated that speakers would be grouped by topic and that topics would be listed “in the  order in which they were registered.”  Those who had not spoken at the previous meeting would be given priority “within each topic area.” But when our members asked where there topic was on the list when they registered to speak, the SRC staff refused to divulge that information.  In other words, you’ll just have to trust us.  Even worse, some members found that their names were not on the list at all.
After a series of fruitless emails, phone calls, and in-person visits with SRC staff, APPS co-founder Lisa Haver sent the following letter to Chairwoman Neff on Wednesday, January 13, 2016:
Click here to read the the letter to SRC Chairwoman Neff.